1962 - The Wyoming Valley Sanitary Authority (WVSA) is formed to provide a sewage treatment system. Its $35M plant will be located in the Breslau section of Hanover Township. 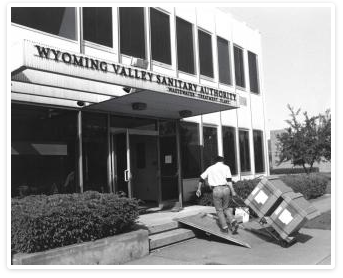 1969 - (July 1) "WVSA owners and users of each property in each municipality served by the Authority WVSA, for the use thereof, an annual rent, to be effective on and after July 1, 1969, and payable quarterly, in advance..."

1969 - (November 26) After seven years of planning and completion of a $27M construction project, the WVSA begins treating raw sewage at its Hanover Township plant, fulfilling a 25-year-old state mandate that area communities refrain from dumping waste into the Susquehanna River. It begins these operations with roughly 45 employees.

1970 - WVSA announces the start of its first solid waste incinerator. The vast chamber will burn approximately 2,900 pounds of solid waste matter an hour and operate at a temperature of about 1,700 degrees Fahrenheit.

1970 - (September 29) Formal ceremonies were held at the treatment plant, officially dedicating the multi-million dollar wastewater and treatment system operated by WVSA as the first major environmental control project in northeast Pennsylvania to combat water pollution. Serving nearly a quarter million residents of 14 communities, the sizeable project included about 74 installations extending approximately 18 miles along both sides of the Susquehanna River, with more than 30 miles of pipeline between Pittston and Nanticoke.

1972 - (June 23) WVSA’s treatment plant sustains substantial damage from Hurricane Agnes, which ravaged several areas of northeast Pennsylvania. It took more than a year for WVSA and the rest of the Wyoming Valley to fulfill recovery efforts.

1976 - (March 19) WVSA announces service to 49,514 customers—marking the most customers served among the then nine sewer authorities operating in Luzerne County.

1986 - WVSA breaks ground for a new secondary treatment plant that will remove 90 percent of the impurities from wastewater the Authority pumped into the Susquehanna River-, marking an improvement over the 35-40% removed by the Authority’s sole, primary system.

1989 - (September 20) Mindful of its customers and their needs, WVSA expands its business office to include a Customer Service division that would skillfully manage customers’ billing inquiries. 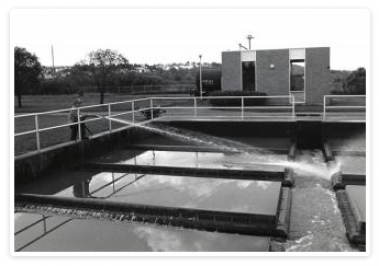 Award for operating one full year (189,167 working hours) without a lost-time accident. WVSA received a similar award in 1991.

1993 - (September 3) WVSA holds a formal, public dedication of its new state-of-the-art Water Testing Laboratory at its Hanover Township plant. Amid fanfare and music from the Hanover Area Marching Band, Authority members thanked those who made the event possible. “This is a tribute to northeast Pennsylvania’s ability to make dreams and ideas a reality,” said former U.S. Rep. Paul Kanjorski, D-Nanticoke. The new $1M facility features include a main lab used for process control and regulatory compliance testing and for testing industrial user samples.

1998 - WVSA employs 110 people and services 85,993 customers for a uniform $98 per year fee. This allowed customers to “enjoy the lowest rates in the region and beyond.” (1) Meanwhile, it continued maintaining 70 miles of sewer lines for six towns and 55 pumping stations while providing billing and collection services. “The WVSA has demonstrated that regionalization can work, given half a chance, and the rewards are lower costs and better service.” (1)

1999 - WVSA is honored with the 1999 Governor’s Award for Environmental Excellence. The award recognized WVSA for its exemplary Community Education and Outreach Program, which engaged local students and customers in environmental awareness activities.

2014 - WVSA enters into Municipal Collections Service Agreement with the Boroughs of Ashley, Larksville, and Luzerne.

2017 - WVSA leads the Regional Stormwater Management Program, an exemplary approach to collaborative, cost-efficient measures aimed at pollution reduction. The program, for which WVSA serves as MS4 (Municipal Separate Storm Sewer System) administrator, is designed to meet federal mandates to reduce pollution in the Susquehanna River by 10% in five years (2023).

2018 - WVSA moves its business office from Hanover Township to Kingston. The move was necessitated by the need to provide a more centralized location for customers and added space for expanded billing services (The WVSA manages wasterwater billing services for 36 towns, along with billing and collections for recycling, garbage and sewer maintenance for several Luzerne County communities).

2020/2021 - In the grip of a worldwide pandemic, WVSA continues serving its communities by providing essential wastewater treatment and stormwater management services.